Warning: Use of undefined constant DATABASE_SERVER - assumed 'DATABASE_SERVER' (this will throw an Error in a future version of PHP) in /nfs/c12/h05/mnt/219892/domains/jetsetjustine.com/html/wp-config.php on line 28
 This is What Happens When You Actually Kill Bedbugs – JUSTINE 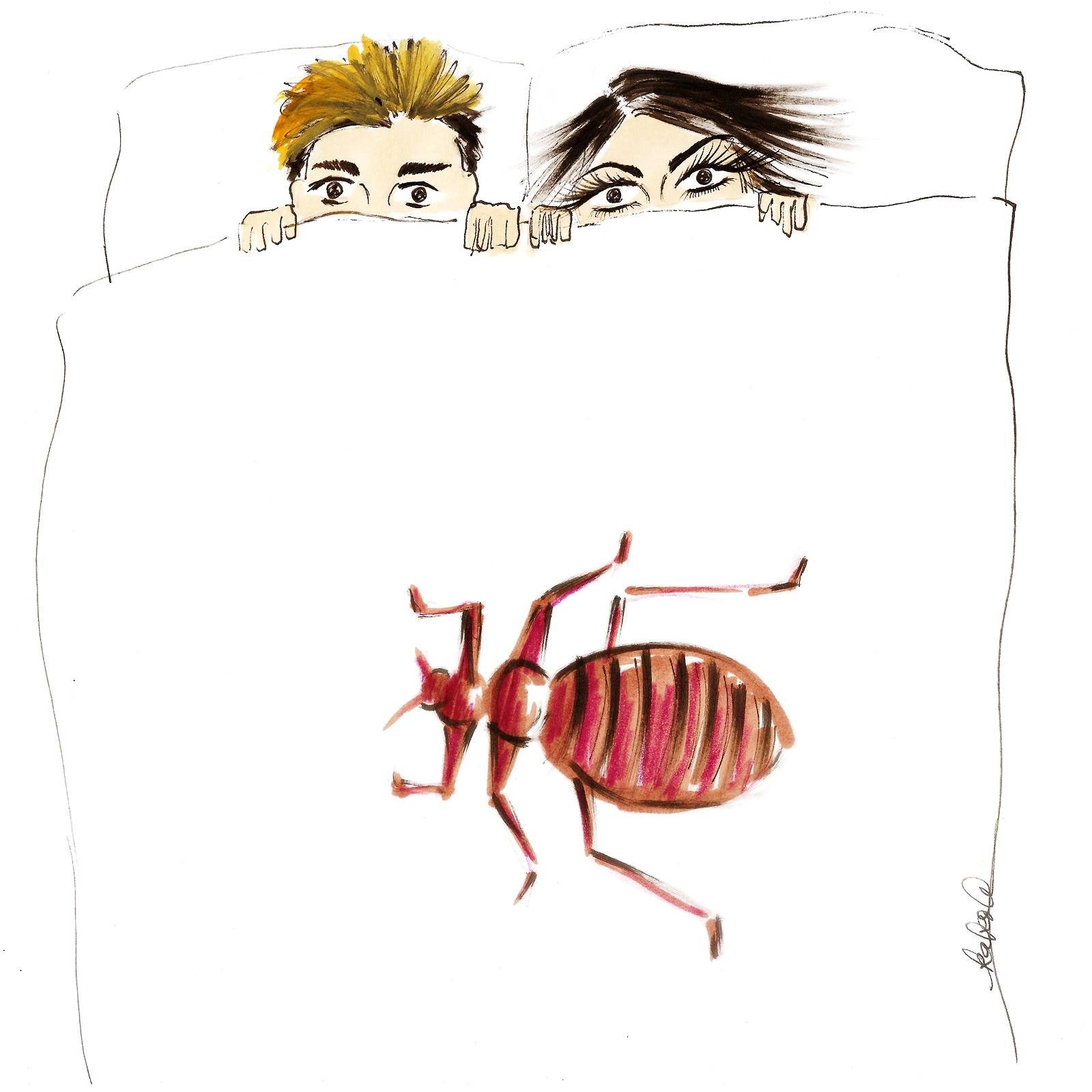 Ever wonder what happens when you actually kill bedbugs? Other than their bodies seizing up and losing their godforsaken ability to reproduce at a wildly rapid rate, you actually get your life back. When you kill a bedbug, you actually add a year to your life. Or at least that’s what I told myself when we started the mass extermination of those little red devils that made a home inside our beloved bed.

Getting bedbugs was probably the worst non-terminal, fixable, thing to ever happen to me. The emotional trauma alone was enough to have longterm effects on how I live my life, which is out of plastic bags from now on. Thank you very much. You see, bedbugs don’t seem like a big problem until you get them. And I’m sure some of you are going to run off and complain that I’m such a shallow person for complaining about bedbugs etc, like you did when I had them, but you know what? I don’t care! Because the few people out there that have had bedbugs will know that it is no joke.

How to Prevent Getting Bedbugs

So, as you can imagine, we probably got bedbugs from traveling. It turns out, however, that Toronto is the #2 city in the world for bedbug infestations. (NYC is #1). But, shy of never traveling again, I’m actually not much safer taking cabs, going to movie theatres or riding the TTC. So, what should you do to prevent getting bedbugs?

First of all, invest in either an amazing dryer or do like we did, and buy a Packtite. Basically, it’s this giant oven that we now throw shoes, luggages, expensive handbags, and jewelry into whenever we come home from a trip or whenever we feel the heebie jeebies. A temperature of 120 degrees Fahrenheit kills bedbugs, if exposed to that heat for about an hour. The oven will do just that. Just plug it in and zap!

Next, when you do travel, it is important to do the following. 1. Never unpack your suitcase. Leave your suitcase in the bathtub or shower of your hotel room on a luggage rack. 2. Pack all your items in plastic bags. I keep everything vacuum packed so that when I come home, the chances of those clothes having been exposed to bedbugs is much lower. Then I zap them in the Packtite for extra security. 3. Check your bed and surrounding area for bedbugs and their droppings, if you see anything suspicious, switch rooms immediately.

How to Detect a BedBug

It’s not as easy as you think. Our exterminator surmised that we had bedbugs for months, and had no idea. Bedbugs are lazy motherfuckers. They only want to be close to where you sleep – that’s it. Sure, when the infestation gets out of control they can be all over the house. Why? Because the males actually will inseminate the female until she bursts (typical). So the females run away from the males if they aren’t looking to get pregnant. The more bedbugs, the less bedroom space they have to play this cat and mouse game, and hence, they take over other rooms.

I mean, obviously, that’s next level. But for a minor infestation of about 50 bugs, they are typically going to be inside your boxspring and surrounding furniture beside your bed. Bedbugs LOVE wood and fabric. They hate tile and metal. They can be in your night tables, behind wooden picture frames and in electrical outlets.

So, check your boxspring first. If you see a bedbug, that’s obviously a problem. But you might not see an actual bug cuz they only like to come out between the hours of 2am – 5am to feed. You’ll have to pull back any plastic guards to really find them (ours were mostly concentrated there). YUUUUUCCCKKK I’m getting shivers just thinking about it. Also, look for their droppings – which basically look like someone went with a black sharpie and drew dots all over your pillowcase or mattress or wall, even. Look for eggs, which look like little pieces of salt that are sticky. They are TINY AF.

You might even find a casing. Basically, a casing is something the bedbug sheds as it matures. It’s kinda yellowish and just looks like a flat shell in the shape of a bedbug. Lastly, if you have bites, you probably have bedbugs. The bites look like red hives. And note that not all people react to the bites. For example, with the amount of droppings around the electrical outlet on my side of the bed you’d think I was getting eaten alive. And yet, I never had any sign of a bite. NOW THAT’S SOME FREAKY SHIT!

How to Get Rid of Bedbugs

All in all, it took about 8 weeks to get rid of the bedbugs. 8 weeks of living out of bags and spending every single night, sleepless, vacuuming our entire apartment. Doing runs to the laundromat twice a day, only to wake up to bedbugs running around our duvet.

Our place had 3 treatments done by Orkin. And guess what? I would absolutely NEVER recommend Orkin. They were the worst. They sent their technician in with only 30 minutes to just do the basics. He didn’t actually steam out our furniture until the third visit, after I threatened his life with an imaginary knife in my hand (good times). That’s when he spent 4 hours in our place doing the job like it was supposed to be done the first time. If you ever get bedbug, send me a message. I’ll give you the number of the entomologist we ended up hiring to really make sure our place was in the clear. Incidentally, unlike Orkin, he does one home per day and will stay for as long as it takes to get rid of the bedbugs, in one go.

Orkin overbooks their technicians and the boxspring covers they supplied us with literally had holes in them. I’ve never been so disappointed by a company that claims to be “the best in the city.” They are just trying to cut corners and capitalize from people’s misfortunes. I don’t like to say negative things but I would hate for one of you to hire them and have to endure what we did.

Seriously, we tried our best to turn a negative into a positive. What else can you do? We tried to find the silver lining in all of this. I learned to just take it day by day. Every morning I woke up, I said to myself: “Ok, self, what needs to get done today. Just do what needs to get done today only. Don’t think about tomorrow.” For someone who lives their life basically in an anticipatory state at all times, living day by day was a huge challenge. But it actually made me realize that stressing out about hypothetical future situations is not that healthy anyway.

Next, I also learned to not sweat the small stuff. And it’s all small stuff! Now, when there’s traffic or the elevator isn’t working, I’ve got a smile on my face. If I could live through bedbugs and still manage to run my business, nothing can stop me. It’s all minor baloney in the grand scheme of things.

Finally, the most important thing I learned from getting bedbugs that was actually beneficial is to put effort into my home, no matter what the cost. That living in a temporary state is never a good idea. You see, we had clothes all over our bedroom floor. No furniture. No nothing. Instead, we decided to take the plunge and hire Kwik Klosets to re-conceptualize our closet spaces. Best decision we ever made. Now, we have all of our clothes in proper places, neatly and organized. It’s a joy to get dressed in the morning with all my stuff nicely on display rather than in piles on the floor or hanging off rolling racks in the hallway.

I mean, we aren’t completely done our home renovations but we’re getting there. We’re also slowly re-doing our office space as well. Basically, I thought, if I’m going to have to go back into that apartment after the whole bedbug ordeal is over, I’m not going to live how we were living AKA like a bomb exploded every day with packages, clothing, papers, etc. I’m going to be organized and give my place the love it deserves. We didn’t get bedbugs because our place was cluttered, but getting rid of the bedbugs was that much harder because of all the things inside our apartment/office.

Lastly, getting bedbugs has made me a cleaner, neater and organized person when it comes to travel and clothes. If you know me, you know there isn’t anything I hate more than putting my clothes away. Well, I sit here with all my clothes currently folded neatly in plastic bags in my closet. I’ve become psycho when I travel, for the better. I actually don’t even pack that much stuff anymore because if it doesn’t fit in a Ziploc, I don’t need it. Who needs Marie Kondo when you can just get bedbugs!

So, that’s that. If you have any questions about bedbugs, let me know. I think there is a huge stigma around bedbugs but they are actually way more common than we think. We can all stand to be a bit more paranoid about them because guess what? It CAN happen to you. Clean or dirty, rich or poor, young or old; bedbugs don’t discriminate. If you have human blood, you’re a perfect candidate.

And just in closing, I’d like to take the time to thank our friends and family who helped us through the entire ordeal and who never judged us or treated us like we had the plague. I know I never said it then, but that really was super admirable and meant so much to me, really.

The good news is that we’re going into winter and bedbugs hate that. So, we can all sleep a bit easier until next summer.

Illustration by Karen Koh of www.theillustrienne.com 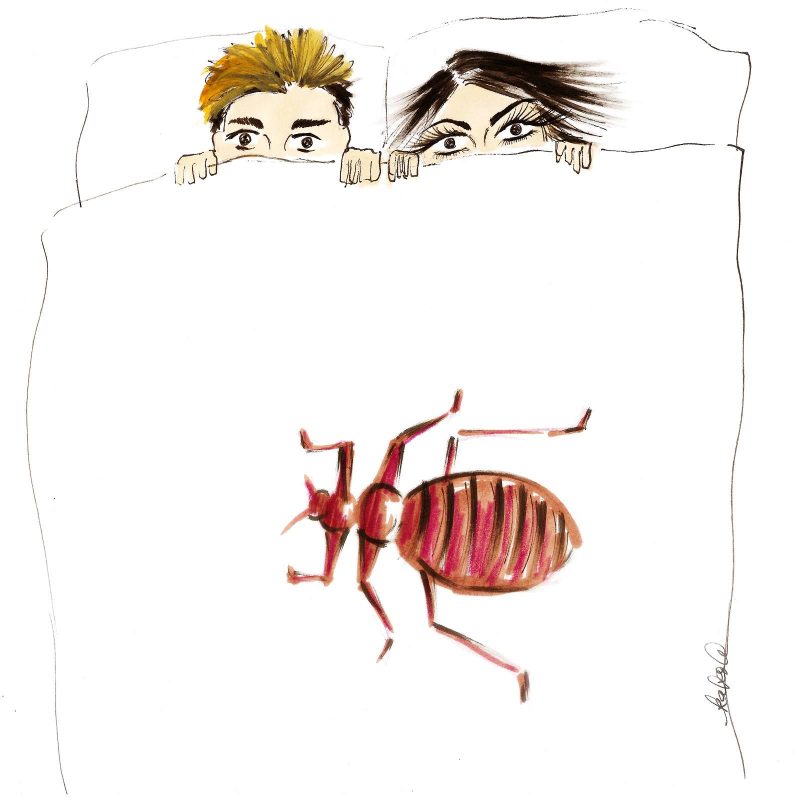